Over the past couple years an unprecedented amount of new discoveries have been made that indicate water and organic chemistry are a lot more common in our solar system then we previously thought. Of course that is good news for human space colonization as well as the prospect of finding extraterrestrial life.

Remember that organic compounds are not quite evidence of life but the elemental building blocks of life as we know it. Which is a limited part of the periodic table. Because of this, finding them on a planet increases the likelihood/probability of finding life that is similar to ours if we were to indeed find life. Of course that is solely based on what that know about organic life and what it is made out of on planet Earth (organic chemistry).

In September 2017 phys.org reported on the MESSENGER spacecrafts discovery of water ice located at the north and south pole of Mercury. They estimate in between 100 billion to 1 trillion tons. The ice maybe up to 20 meters (65.5 ft) deep in some areas. A newer study hints that there may be even more water inside of 3 additional craters nearer to the polar region.

On June 7th 2018 a publication explains how the NASA Curiosity Rover revealed the historical presence of organic molecules on Mars as far back as 3.5 billion years ago. The rover took samples inside of Gale Crater, which scientists believe may have once been a lake. They discovered the organic molecules baked in to remnants of sulfur spiked rock they think may have protected them from damage via radiation and bleach like molecules called perchlorates.

On June 20th 2018 an article published on a technology website illustrates how operators of the Dawn spacecraft came to the conclusion that there were more organic molecules on Ceres than previously thought. Dawn has been orbiting Ceres, the largest object in the asteroid belt for five years and in February 2017 they discovered the first signs of organic chemistry. Fast forward a year later and even more organic molecules have been identified. What is most peculiar is how they appear to accumulate around Emutet Crater, rather then being equally distributed across the entire globe.

In late December of 2018 ‘Russia Times’ reported on the discovery of frozen water ice photographed inside of a Martian crater. A composite image of photos taken by the Mars Express High Resolution Stereo Camera depicts a crater filled with 2200 cubic kilometers of water ice. It is located around the planets north pole in a desert like area called Olympia Undae. The geology of the surrounding landscape produces a lair of cold air that shields the inside from a larger range of elements, allowing it to remain frozen throughout the entire year. Imagine for example if we could harvest water from a frozen crater instead of drilling a hole in to the Martian surface. 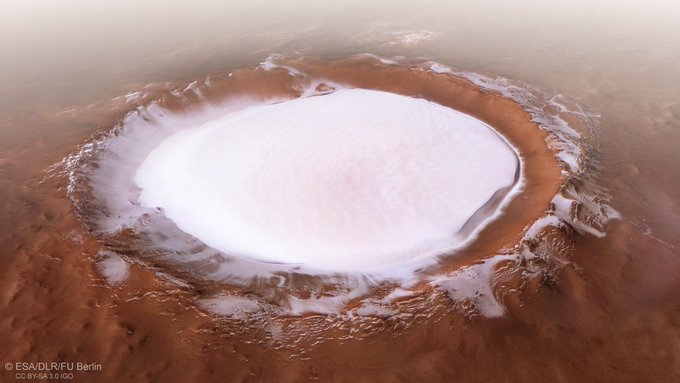 On November 18th of this year scientists have finally released a detailed global map of Saturns largest moon Titan- the only natural satellite (moon) in our entire solar system with a fully functioning atmosphere. Along with the discovery of a winding network of liquid methane they have also located sprawling plains of organic chemistry in the form of Vinyl Cyanide. Back in 2017 researchers confirmed the presence of Vinyl Cyanide on Titan which is a gas here on Earth, but further away from the Sun the organic compound exists is in a solid enough state that it is theoretically capable of forming life much in a similar way to carbon.

Researchers have discovered plumes of water vapor spewing out of Jupiters icey cold moon Europa. On November 18th 2019 A team led by NASA planetary scientist Lucas Paganini published a paper regarding the discovery called “A measurement of water vapour amid a largely quiescent environment on Europa.”   Scientists have long suspected that water exists underneath the surface of the Jovian moon due to an uncharacteristically smooth surface and strange brown splotches scattered throughout they believe the discharge may be an upwelling of chemicals from the subsurface ocean.

An international team from The US and Japan recently discovered organic sugar on an meteorite which adds to the plausibility of Pansermia.

Sugar is an even more important requirement for life. We need Glucose to move and sugar phosphate is the genetic backbone of organic life. RNA, the methodical composers of DNA are made out of Ribose a sugary compound of Hydrogen Carbon and Oxygen.

Ribose is what the team found on two primitive meteorites: NWA 801 and Murchison.

Dr Furukawa from the Department of Earth Science at Tokyo University was quoted saying “The research provides the first direct evidence of ribose in space and the delivery of the sugar to Earth. The extraterrestrial sugar might have contributed to the formation of RNA on the prebiotic Earth which possibly led to the origin of life.”

Dr. Dworkin, a scientist in NASAs Solar System Exploration Division was surprised by the age of the meteorites “It’s remarkable that a molecule as fragile as ribose could be detected in such ancient material,”

The International team believe the new findings will help them better interpret samples extracted from the first asteroid mining operation By Hayabusa and OSIRUS-REX on Asteroid Bennu.

Multiple lines of evidence, including isotope analysis indicated that contamination was unlikely.

A more recent article published by Frontiers of Microbiology in Japan describe the hypothesis of transference from Mars to Earth, called Pansermia whereby some kind of tardigrade like organism is scattered throughout the solar system by the wind of cosmic dust and exploded planetary remnants.

In the latest experiment they revealed through “the help of some protective shielding, some bacteria was durable enough to survive exposure of ultraviolet radiation in deep space for as long as 10 years — enough theoretical time to hop from Mars to Earth.”

“It increases the probability of the process, (making it) much higher”, said Yamagishi. “Some think that life is very rare and happened only once in the universe, while others think that life can happen on every suitable planet. If panspermia is possible, life must exist much more often than we previously thought.”

Our own article reports on the increasing evidence in support of microscopic organisms in the Venusian atmosphere, further away from the sweltering surface conditions below. As well as proposals for the development of a floating research platform. Or even the possibility of a Venusian Sky City.