The famous pentagonal stormfront on Jupiter has transformed in to a hexagon.

The following photo, taken on November 3rd 2019 by the Juno spacecraft depicts 6 cyclones arranged in to a pentagonal formation at Jupiters south pole. The anomalous shape has existed since human beings first began observing this part of Jupiter. 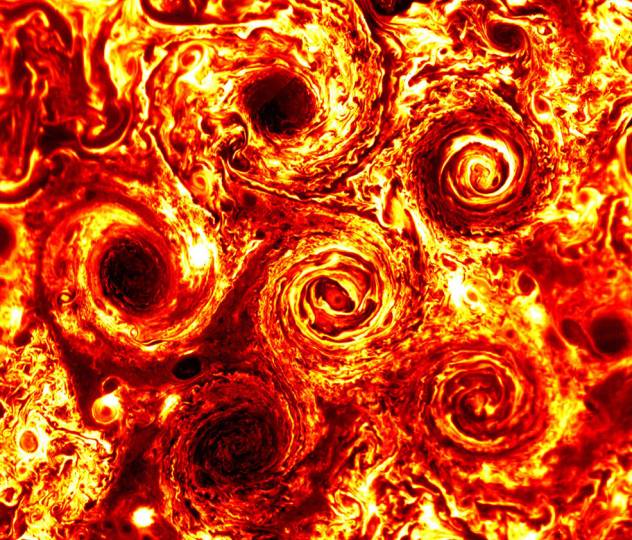 Juno has been orbiting the largest planet in our solar system since 2016. During it’s most recent flyby a new storm was identified in the early stages of formation. It appears to have “pushed” the other storms away from one another, deviating from a 108 degree inclination – in the case of a pentagon, to a 120 degree angle – that of a Hexagon. 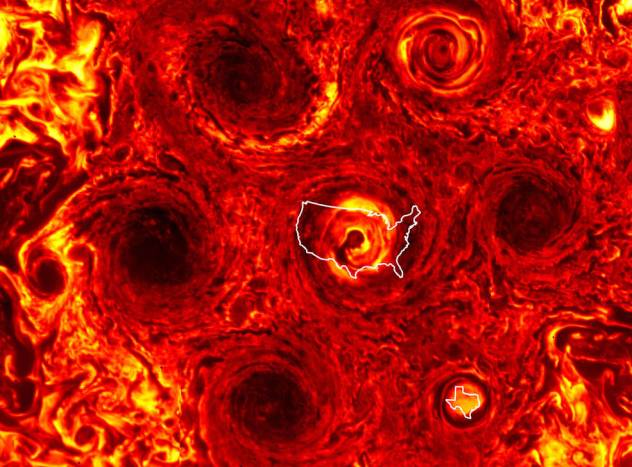 The tendency for these superstorms on Jupiter to assume formation under a near mathematically perfect symmetric polygon is a mystery that baffles scientists to this day. At the north pole there are also 8 cyclones that arrange themselves in to a Dietragon (what you get if you connect two pyramids at the base)

Before the discovery, scientists did not think this was even possible. In fact they were expecting the zones and belts at the center of the planet to weaken toward the poles, eventually resulting in chaotic turbulence – not organized structure

However, lets be absolutely clear –  this phenomena is not restricted to Jupiter. Saturn demonstrates a very similar feature right over top of it’s south pole. For the longest time Saturns hexagon appeared to be one giant dark cloud until scientists got a closer look, discovering a hexagon shaped vortex towering several hundred kilometres above the original cloud formation.

In August 2015 AAS Nova reported how a team of researchers from Mexico were able to replicate the “jetstream” in a computer simulation by introducing small perturbations as it rotated around.

Liked it? Take a second to support Joshua Phoenix on Patreon!

Conscious Global Network
Dedicated to fostering the mutual progress of humankind, CGN is an organization that covers scientific, technological, psychological and philosophical concepts from a unique angle that you likely haven't seen before. Check out the website at consciousglobalnetwork.com
Elite Exodus Theory of Civilization Collapse and Rebirth
by Joshua Phoenix

Is it possible that elite families from the ancient past we’re capable of avoiding natural catastrophe by retreating underground or in to outer space? If so, would they not one day return, posing as gods with advanced technology, indistinguishable from magic? In this episode I discuss the possibility that ancient civilizations were far more advanced then we think and that their upper class of nobles we’re capable of predicting the future and avoiding catastrophe.