Space-X elaborates upon their plan to colonize Mars in 2024 while the Swiss Polytechnic Institute announces a 2038 research base.

Recently, Elon Musk gained some press coverage for debating skeptics over the feasibility of terraforming Mars. Skeptics claim their is not enough carbon dioxide but Elons counterargument is that their is an abundance of carbon dioxide in the soil and ice.

Even more recently Musk held a private meeting with space experts from around the globe in order to discuss his plans for colonizing Mars.

Of those points the most relevant to colonization are:

Meaning that the first rockets will come with the tools necessary to make use of Martian resources for building settlements.

Again, so BFRs will arrive with whatevers required for complex construction projects to commence on the surface.

Say if a dangerous martian dust storm were to take out a refinery, they would have extra hardware to compensate.

Wooster confirms that Space-X is still dedicated to an extremely ambitious timeline. The first launch is scheduled for 2022

This initial cargo mission is focused on locating water as well as erecting an infrastructure for power production and life support.

The second cargo and crew missions are focused on transporting the first permanent settlers, setting up a fuel depot and building a base across the surface.

It was suggested that crewed BFRs could be left on the surface to act as an early habitat for colonists while uncrewed BFRs would return to Earth for more cargo.

Another slide explains the importance of water ice, lower latitudes, elevation between -3 and -4 kilometres, as well as both the strength and shape of mineral composition where they plan to land.

A large amount of time and fuel is required to barge supplies across the vastness of outer space – One of the main arguments used by proponents of moon colonization. So they’re going to try and become self sufficient as quickly as possible by utilizing whatever martian resources they can find.

In the slide below Wooster highlights the importance of clean, plentiful water ice and diverse profiles of Regolith (rock) near the location 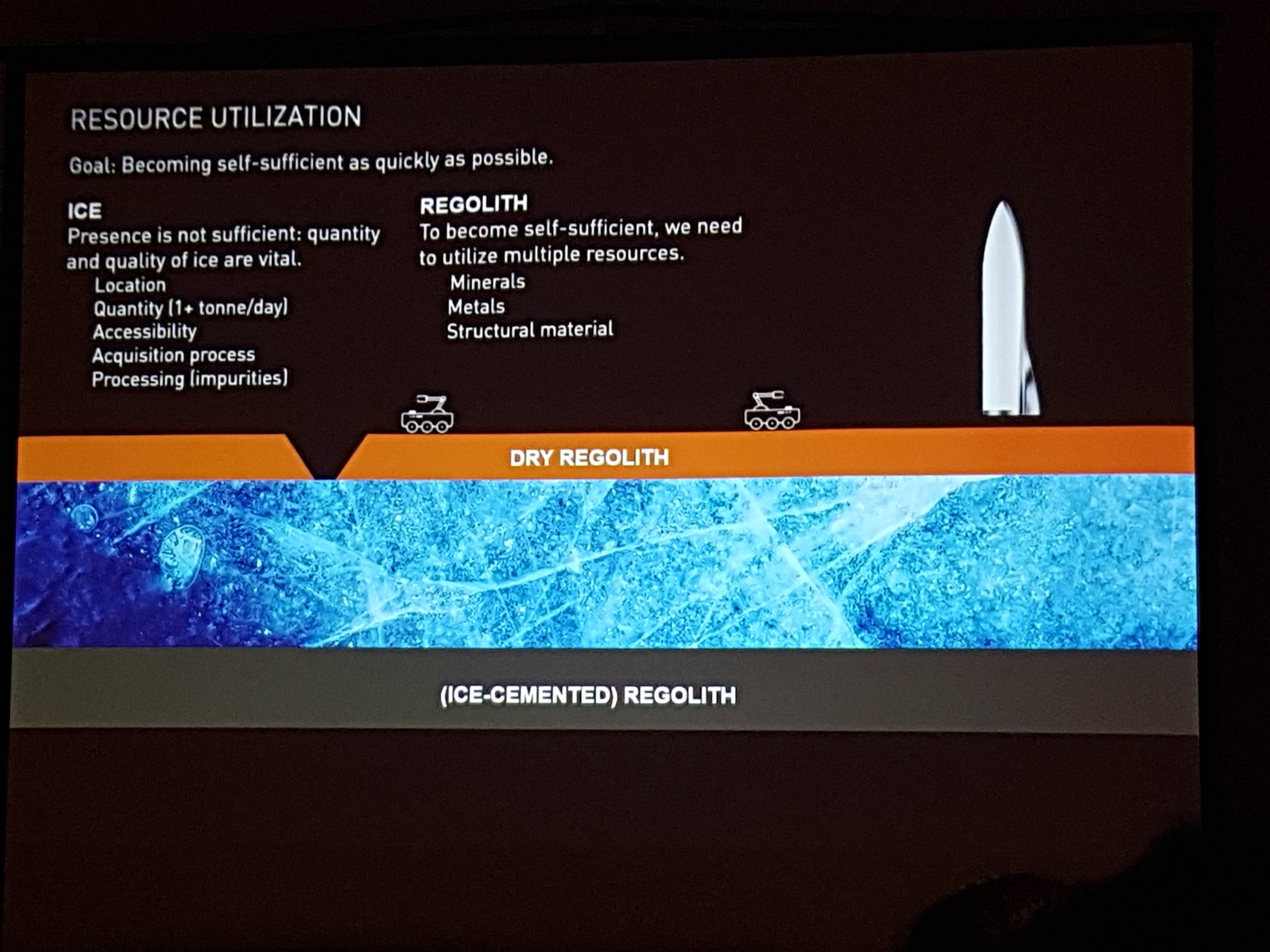 Another project recently announced by the Swiss Polythenic Institute uses frozen ice as a construction material for reflecting deadly radiation away from the buildings inhabitants.

The Swiss are more concerned with searching for extraterrestrial life by establishing a research base nearer to the poles. According to the Swiss Polythenic Institute most water exists close to the Martian poles, in fact the Italian Space Agency recently discovered a sea of liquid water beneath the south pole.

“The poles may pose more challenges in the beginning, but they are the best location for the long term since they harbor natural resources that we may be able to use,” says Anne-Marlene Rüede, lead author of the study and a student minoring in Space Technology at EPFL’s Space Engineering Center (eSpace).

“We wanted to develop a strategy based on technologies that have been selected accordingly and outline a test scenario so that 20 years from now, astronauts will be able to carry out this kind of space mission,” she adds.

So as you can see even something as small as a research base still lags a decade behind Space-X first BFR missions. Of course – the more colonists the better, however by the time Switzerland arrives all the best research may have already been done!

In the first phase of the mission robots are tasked with setting up the bases central core, 3 airlocks and overarching dome structure. This central core holds minimal living quarters, while the large overarching dome protects the base from radiation, micro-meteors and depressurization. It also provides another living quarters on top of the martian soil. It is composed of polyethylene fiber encased in a three meter thick layer of ice.

Once the research base has been erected a “crane system” will be set on an orbital path around Mars. This shuttle doubles as a waypoint between Earth and Mars as well as a kind of Ferry transport system to locations on the red planet. Once a shuttle dock with the craft they unload their cargo then the crane system lowers it down to the surface.

“We would need to conduct an initial mission to try everything out for the first time. And the better that initial mission is thought out, the faster we will be able to get things going and move on to colonization,” says Anne-Marlene Rüede

In July, NASA announced 5 winners of their Mars Habitat contest