Made in Space is responsible for the first 3D printer deployed on the International Space Station. It is capable of printing high grade plastic in low gravity environments so as to create tools and other classified objects.

They’re also working on a metal 3D printer for Mars, as well as a way to transform asteroids in to autonomous spacecraft.

They also set a world record for the “longest 3D printed non-assembled piece” in the development of their ARchinaut satellite 3D Printer.

Allevi is well known for their 3D bioprinters Allevi 1, Allevi 2, and Allevi 6 all of which differ in the amount of nozzles they employ in the extrusion of organic material.

The Allevi 1 bioprinter in particular apparently provides “the smallest footprint, widest material capabilities and best price tag of any 3D bioprinter on the market.”

Their next ZeroG 3D bioprinter will ” “allow scientists […] to simultaneously run experiments both on the ground and in space to observe biological differences that occur with and without gravity.” 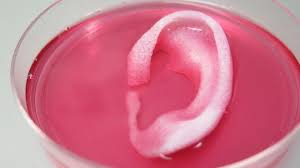 Stem cells can differentiate in to any tissue. This is an example of a 3D printed ear. Credit: Wake Forest

The ultimate goal is to 3D print life saving regenerative tissues capable of providing a timely response to injuries sustained in outer space.

Liked it? Take a second to support Joshua Phoenix on Patreon!

Conscious Global Network
Dedicated to fostering the mutual progress of humankind, CGN is an organization that covers scientific, technological, psychological and philosophical concepts from a unique angle that you likely haven't seen before. Check out the website at consciousglobalnetwork.com
Elite Exodus Theory of Civilization Collapse and Rebirth
by Joshua Phoenix

Is it possible that elite families from the ancient past we’re capable of avoiding natural catastrophe by retreating underground or in to outer space? If so, would they not one day return, posing as gods with advanced technology, indistinguishable from magic? In this episode I discuss the possibility that ancient civilizations were far more advanced then we think and that their upper class of nobles we’re capable of predicting the future and avoiding catastrophe.