The slowest oscillations found in the brain were once considered a relic of fMRI scans. Now instead they appear to emerge from the core of the brain – coordinating different parts at the peak of each wave and reducing magnitude at the trough. Researchers are probing  the depths of psychopathology as we speak in order to find a connection between infraslow and psychiatric treatment.

This is akin to a siren, whereby the excitability of neurons, or their “action potential”  slowly increases in symphony with infraslow waves – eventually reversing it’s momenta. A type of dynamic oscillation that defines what brain waves actually are – bandwidths of neurological activity that adjust their size and direction in response to demands from the environment. Getting faster/smaller when focus is required and slower/larger to relax, meditate and go to sleep. The main take away however is that larger waves condition smaller waves and so the largest wave – effects all others smaller ones in the brain.

Since your blood becomes oxidised in response to neurons firing scientists can use FMRi  machines to deduce activity in the brain from subtle differences in the magnetic signature of oxygen from other elements. It is also important to distinguish that they used mice in this study, although as far as we know their brain waves act in basically the same way, just  at a different scale.

Infraslow oscillations are the slowest brain waves we know.

In the earlier 2000s scientists began preliminary research in to “resting state networks”.  Using FMRis they revealed that brains do not cease all function when there is no task to perform – instead they keep humming along,  resorting to a default network of transient thought, A concept that may seem pretty intuitive but did not have much scientific presence until then. These thoughts can include all sorts of different things like daydreaming, comparing different things, reviewing memories etc. They also include thoughts of negative effect, like harsh self talk, or doubt and guilt etc. 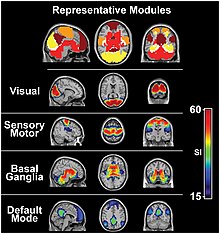 What they’ve eventually found is that all sorts of mental illnesses are associated with peculiar resting state networks, and that infraslow oscillations were present in each subject regardless of their level of psychopathology. Since resting state networks fortify and prune their activity in response to infraslow oscillations scientists began to explore this variable more closely.

With newer studies done on mice it appears that neurons do indeed “surf” the tide and communicate across distances in the brain using peaks in infra-slow oscillation. What scientists are trying to figure out now given the light of that new information is whether or not deformation in the time signature of infra-slow oscillations can lead to faulty resting state networks, which are correlated with mental illness.

Research in to meditation has found that the deepest states consciously evoked are in the Delta range and lower – often easily exhibited by Monks. Of course meditative practice is involved with cultivating better control over these “resting state networks. So perhaps regular meditation is exactly what is needed to disentrench infraslow control from the noisy foreground of resting state networks.

With patience other people can get to the same state through diligent practice and the use of acoustic entrainment. Such states have been used to effectively treat depression in the past, so perhaps it is the refinement of an otherwise unconscious world that leads to emergence from “the dark night of the soul”. This meditative state is also connected to a  wide range of more and less controversial findings. Including the ability to

It is important to note that slow wave oscillations are different from the flow state. “Flow” , refers to a state of balance between different parts of the brain. It is the equalisation or “levelling off” of neural activity that occurs during periods of well rehearsed skill performance.

For example, generally our brain works in a specialised manner, switching between different sides of the prefrontal cortex in response to shifting demands. However when a musician performs an original song that is well rehearsed all parts of the brain light up together and specialisation is reduced. So where the peak of infraslow oscillations may be correlated with “flow” due to it’s rallying nature, they are not the same thing.

What they found in the article published March 29th on the journal Nature magazine is that infraslow oscillations reverse direction when you go to sleep, which is interesting considering that sleep is unique in it’s ability to heal the body and digest psychic material via the dream state. Could the reverse direction of infraslow have something to do with this? But that is another article entirely, sleep is actually quite a complex subject – involving many different states.

In conclusion, scientists using FMRIs to study blood oxidation levels in mice found that infraslow oscillation emerges from the core of the brain and lead to a “rallying’ of neural activity at the peak of each wave. Furthermore – perturbations in the infra slow time appear to effect people at a psychological level as well. In first episode untreated shizophrenics reduced phase coherence between the dorsolateral prefrontal cortex and left insular media within the frequency band of o.02 hz and 0.04 hz appears to play a key role in developing the illness.

So further research is being dedicated to the exploration of an underlying link between psychopathology and faulty infraslow wave oscillations.