Ad Astras VASIMIR engine has successfully completed 100 hr stress test and along with it NASAs NextStep Contract Milestone for year two. The ground breaking VASIMIR engine is expected to decrease the cost of propulsion by more than a whole order of magnitude (or 1100%)

The future of space travel has far reaching implications for every major issue on the planet. If we could eventually live in outer space overpopulation wouldn’t be as much of a concern. Neither would immigration, unemployment, or pollution. Expanding in to the solar system could depressurise the entire global economy – providing millions of new jobs and opportunities for re-location.

Luckily some very influential people are well aware of this fact. Some of our most daring investors have set their eyes on Jupiters icey oceanic moon and even neighbouring star Alpha Centauri. While others are fond of a little closer to home. Space-X for example has recently announced plans to build an “Interplanetary Colonisation Vessel” for a one way trip to Mars.

Whether it’s going to Mars or all the way to Alpha Centauri state of the art propulsion technology is critical to the success of each mission. Much like our own transportation system here on Earth – energy and propulsion are the blood that runs through the veins of progress in space. It is universal and scale invariant-  pertaining to government just as much as it does any private aerospace sector.

Traditionally speaking, modern rocketry is powered by chemical energy -where two elements react to create combustion. In this process most of a rockets mass is consumed by more fuel for resupply. Unfortunately a lot more money and time is spent simply trying to get fuel in to space then is spent on actually exploring it.

Luckily, There are a lot of people attempting to solve this problem.

That is why for example companies like Planetary Resources and Deep Space Industries are testing prototypes for asteroid mining in low earth orbit. Using a combination of orbital telescopes and micro-satellite drone technology they want to scan nearby asteroids for ice. Eventually extracting the water to break apart – thereby creating more liquid oxygen/hydrogen for fuel without ever having to return to Earth.

While intrepid Aerospace companies like PR and DSI search for solutions in the unregulated wilderness of asteroid mining other companies are working together with NASA to improve propulsion technology from the ground up.

In November 2014 NASA announced a competitive solicitation for aerospace organizations looking to fund new technology. One of the companies that succeeded in claiming a spot was Ad Astra.

“The exhaust of a rocket is a few thousand degrees. We want it to be like the sun – A million degrees, or even two million. No chemical reaction can do that, so we don’t do chemistry. We use electricity. We go from gas to plasma.

The limit is that if you make it to hot the rocket will melt. So we choose not to do be limited by metals or materials. Our pipe through which this exhaust goes is really a magnetic pipe. An invisible force.

“We have eliminated the most fundamental limitation in rocket propulsion. Which is how hot you can make the exhaust”

The science behind VASIMIR is similar in essence to nuclear fusion. For example the International Thermonuclear Experimental Reactor (ITER) – a project involving 35 different countries around the world in an attempt to contain nuclear fusion also uses electromagnetic fields to confine a temperature greater than the surface of the sun.

Between ITERs work on the largest fusion reactor in the world, Amazon funded General Fusions approach to their home-sized Polywell Engine and the VASIMIR engine  a lot of these new device rely on superconductors to control and direct the electricity of charged particles. Electromagnetic field containment appears as quite an emerging trend in breakthrough energy tech.

For example, the VASIMIR engine in particular uses radiowave bombardment to dislodge electrons from the orbital shell of a noble gas. The resulting cold plasma (soup of charged particles) is then shuttled from the Helicon Coupler via preliminary magnets to the second part of the engine – called the Ion Cyclotron Resonance Chamber

At this point stronger electromagnets compress the energised particles in to a small region centre-steam, heating the plasma while “squeezing” it out of a tailpipe at the end. The resulting accelerated plasma propels the vessel forward without ever actually making contact with the engines solid support structure inside.

In the process the researchers have somehow managed to increase energy output by a whole order of magnitude while simultaneously eliminating heat as an obstacle entirely. What results ultimately, is more then a ten fold decrease in costs associated with propulsion.

Another particularly unique feature about the engine is that it is incredibly adaptable compared to most other propulsion technologies. VASIMIR actually stands for variable specific impulse engine. Specific impulse is the total impulse (or change in momentum) delivered per unit of rocket propellant. In other words it is how fast you can go based on the fuel you have.

Ordinary chemical rockets are often stuck on one  “specific impulse” however with VASIMIR, a plasma powered device – you can switch between low/high impulse by alternating magnets to change the temperature. A simple change, with even more positive repercussions for travel time, costs etc. This means that for example, far less “swapping out” needs to occur before an orbital VASIMIR engine can be re-purposed for interplanetary travel. Making it a sort of swiss army knife of propulsion.

Since this technology is expected to lower the cost of space travel by a whole order of magnitude one can only begin to imagine what kind of things are made possible that weren’t before, and how many people could gain access to space that had none previously. By offering those entrepreneurs with the will and means to start a business in outer space we may witness a rebirth of public interest in the place beyond our clouds.

In other words This engine could very well be the catalyst we need for a global civilisation running out of land and natural resources. With a population only growing in size, expanding in to the solar system may be our best hope for survival. However, before we colonise other worlds, we need to clean up our own mess!

One of the biggest threats to astronauts and equipment in Low Earth Orbit is a whole layer of leftover space junk. Accumulated debris from decades of abandoned upper stage material has actually began to form a sort of shell of potentially dangerous objects around our planet. 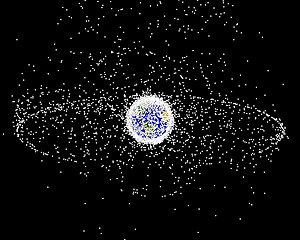 For the longest time it was an ordinary part of launch to abandon obsolete equipment in Low Earth Orbit. That’s because once the gravity well of Earth is circumvented a whole range of equipment is no longer needed for the remaining journey. Therefor the payload detaches and navigate the remaining distance with small chemical rockets. Afterwards, whatever disposable objects remains are left to careen through the skies of planet Earth until they eventually dissolve under the extreme temperature of re-entry.

This creates a problem for not only whoever is pelted in the head by a rogue capacitor  but to those of us wanting to pierce the veil of debris and transform low earth orbit in to a functional economy.

This is where the team at Ad Astra has offered to initially help. Since VASIMIR can maneuver to 19 different targets and alternate it’s trajectory by varying specific impulse it makes a perfect barge for smaller chemical rockets that can be deployed closer to the junk for de-orbiting.

Thiss is an important distinction. It’s not that chemical propulsion will be abandoned after the VASIMIR engine, just that it will be re-purposed and used less often.